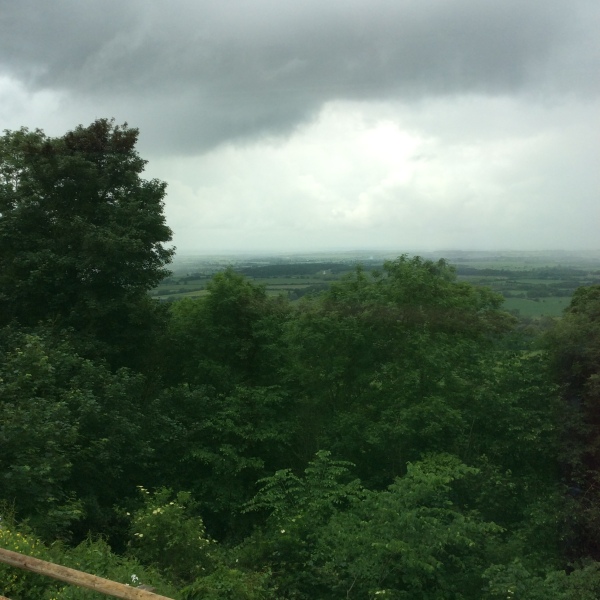 “Would Byron’s men haunt the Down in years to come, a restless and wild eyed horde charging into the guns of Waller’s army for evermore?”

Visiting battle fields is a melancholy, but addictive, pursuit. At some places the air remains thick with the ghosts of the dead. I visited Culloden at the age of 11 with my parents and I still recall the shivers which ran down my spine as we inspected one weather-beaten clan memorial after another. In the days before the existence of a visitors’ centre, we were the only visitors on a summer’s day among a host of highland warrior war dead.

Since then (but sadly not in 2020) I have visited other battlefields, particularly those of the English Civil War.  Thanks to Zoom (and a certain amount of very early rising due to the time difference between the UK and Australia) I am currently able to participate in Battlefields Trust and National Army Museum talks on everything from Boudica to my personal consuming passion, Basing House. The other Zoomees clutch glasses of wine, while I hold a mug of coffee and wear a sweatshirt hastily tugged on over my PJs. It is an unexpected, beneficial side effect of the Plague Year.

But writing historical fiction about battlefields is so much easier when you have climbed the hill to appreciate a particular vantage point. Despite being partly obscured by trees, the view from Edgehill’s 700 ft high ridge of where the fighting took place below gives wonderful perspective.

“From his position high on Edgehill, Rafe … could see empty fields stretching before him, far down below…

So distant they could have been pieces on a chessboard, Rafe saw the forces of the enemy streaming onto the fields below the ridge. As he watched, the antlike columns assumed the shapes of men and horses. Regiments were taking their places, the patterns changing as they moved from marching order into battle formation.”

In other places both view and landscape have remained the same. I was so haunted by the carpet of poppies on Roundway Down above Devizes, with its associations of the Great War overlaying those of the 1643 cavalry battle between the forces of King and Parliament, that the photo became my screensaver for many months.

“He shuddered at the thought his corpse might be left upon the Down to rot…until nothing remained of him but bones bleaching among the poppies.”

As I discovered when I began writing historical fiction, and searching for “what really happened”, the location of a battle is not always clear. Those present at the battle were not generally concerned with pinpointing the location for future generations. “Facts” in their reports were obscured by clouds of gun smoke, their inability to see the entire battlefield from where they were fighting, and the desire to portray their own performance in the best possible light.

They would refer to “a little hill”, a wood, or rising ground. Sometimes archaeologists come to the rescue when a dig uncovers civil war ammunition. This may pinpoint where the action took place, and what types of soldiers were fighting. Musket balls mean infantry or dragoons, while pistol suggests cavalry. A complete lack of any pistol (or musket) balls suggests the battle took place in a different location. If they are lying thickly in the ground it is evidence of heavy fighting (but beware, it might also mean the baggage train, with its stores of ammunition, was waylaid at that point).

For a writer of fiction, a dispute is not necessarily a bad thing – it gives us more wiggle room. But it can be fantastic to get an indisputable feel and proof of how an event went horribly wrong.  Walking the site of the battle of Cheriton (March 1644), I became lost in the maze of narrow lanes the Royalist cavalry had charged down. So narrow I could touch them with both hands, no wonder the cavalry were beaten for the first time in open battle.

“Bramdean Lane was so narrow that it scarcely permitted the passage of two horses side by side. The enemy would pick his men off as they filed into the open two by two like the animals into Noah’s ark…

Behind him, the riders were forming up in two files, their movements hampered by the confinement of the lane and the musketeers crouching in the hedges.

… Ahead were confused sounds of fighting from the unseen battlefield, the clash of sword play, gunfire, screams of man and beast mingling with the urgent beat of drums.”

(From forthcoming novel The Tawny Sash)

The best illustration for me was when visiting Chester in 2018. King Charles I was said to have “watched the battle” of Rowton Moor, which lay outside the city, from a tower on the city walls now known as “The King’s Tower”. My guide took me inside the tower where I inspected the view from the window. Then she drove me out to the site of the battle which, even today, remains well outside Chester’s suburbs. I tramped across the rising ground (now farmland) and agreed with her that even with a telescope (which did exist in 1644), It would have been totally impossible for the king to watch the battle. That particular battle is yet to feature in my writing, but watch this space…